“What do you DO exactly?” We get this question a lot.The truth is, our ministry has grown and evolved since we landed in Guatemala on July 13, 2012.From the beginning we felt God calling us to disciple boys to become men of God. Three years ago, I couldn’t have guessed that it would look like it does today.

The first year that we held classes for the Vencedor Boys Academy we invited every boy in the school to have lunch with us, learn a little English and study the bible. Just over 100 boys showed up! My ministry partner David and I split the boys up and reassessed what we could teach them. Our goal that first year was to share scripture with them that showed God’s love. That was it.

The next year we decided to invite just the 3rd-6th graders. I would take 3rd and 4th grade and David would take 5th and 6th. Somehow I still ended up with almost 40 boys. I split my boys into two groups and that made all the difference.

I wondered if the newness of the academy would wear off. Would some of the boys start to drop off once they realized this was another 3 hours of school? It didn’t drop off. They kept coming and as a matter of fact, new boys were showing up!

THAT is what the bible talks about to hunger and thirst for righteousness. Four days a week 40 boys from 3rd and 4th grade piled into the little block home we rent. It was almost perfect. At the end of the last school year David and I sat down again to evaluate our progress. There was something missing. The boys LOVED the academy. They were learning. They felt loved. But it still felt like we could do more.

And so this year as my 4th graders moved up to Davids class, I chose 5 boys I would disciple. My plan was to spend an additional day a week with just these five boys. We would go deeper into the Word. We would pray about their roles in the community. We would visit so many who were sick and pray for them. We would help widows and older people. THIS. This is why G-d called us to Guatemala. THIS expands the kingdom. THIS glorifies our Father. THIS is love.

This last Thursday, while I was meeting with the 5 discipleship boys, the public school principal stopped by to tell me about a boy from my 4th grade class. He explained that Marvin had gone home sick and that part of his body, including one of his arms and his tongue were paralyzed. He explained that some of the boys were playing a “satanic game” and he wondered if Marvin’s sickness was related.

The boys and I finished what we were studying and walked to Marvin’s house. His dad had left his job working in the fields and was there to check on his son and I began to see how big of a deal this was. When we got there Marvin was feeling better. My five boys stood off to the side and respectfully listened to Marvin’s parents and I talk.

I told them that Marvin is our brother and that brothers stand up for each other. “We’re here because we love Marvin.” I asked if we could pray for him.

“Thank you,” his mom said in a quiet voice.

I asked the boys which one of them would like to pray? Deiker raised his hand and walked over to Marvin. We all stood around him and prayed for healing. We prayed that God would bless this family. We prayed that Marvin would feel G-d’s love pouring out from his brothers. We prayed against evil.

When we finished praying Marvin’s mom had tears rolling down her cheeks.  I told them I would be back to check on Marvin but as it turns out, he was back in school the next day. 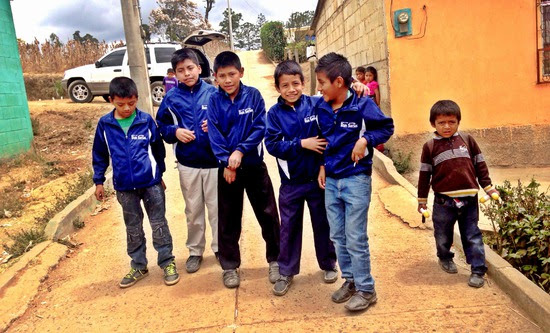