Skip links
(The following blog post is by my 12-year-old daughter Cecilia.)
Today I went to El Rosario for the first time. It was amazing. I already miss everyone I met there and want to go back as soon as possible. Let me tell you about a part of my time there.
It started when my family and I were walking through a path of corn stalks, coffee plants and other crops. After walking for a while, we saw a corn-stalk, tin-roof home.
“Buenos dias!” my dad called. There was no answer. We walked up a little closer.
“Buenos dias!” my dad repeated. A lady walked out, holding a baby in her arms. My dad introduced us to the lady, Doña Maria. He had met her before on previous trips. She welcomed us into her home, apologizing that she didn’t have any benches for us to sit on. She began to talk to my dad. I looked around the small house. It was just a little bigger than my bedroom. Completely dirt floors.  Patches of light streaming through the cracks in the corn stalks revealed smoke crowding around the home. Two beds lay at each side. A dresser stood next to one bed, a fire pit next to the other. Two buckets of dirty water lay against the wall. My nose began to sting.
My dad told Doña Maria that we had food for her. He told her we would set it out on her bed and then she could put it wherever she would like. Mom, Dad and I took the bags we had been carrying and set all the food out. We brought out rice-arroz, beans-frijoles, milk-leche, apples-manzanas, sugar-azucar, flour-harina, and juice for  the morning.
She thanked us for all the food. You could hear in her voice even without understanding that she was more than thankful. She then told my dad stories that had happened in the last few days. That last night, she woke up freezing. She prayed to God that He would warm her. Just then, the sun rose and she began to feel warmer. Also, she recently had a dream about a visitor bringing her gifts. It makes you realize how the things we take for granted would be miracles in someone else’s life. If you think about it, our lives are miracles…we aren’t thankful enough to realize it.
My eyes stung from the smoke so I stepped outside to see my brothers watching Doña Maria’s other child, a six year old boy, flying a kite-cometa. He flew it without wind. His magic little fingers pulled the kite up into the sky. His eyes lit up and he giggled at the kite. How could he be so happy?
“Come on inside…” my dad said, “we’re going to pray.” He motioned us to come inside. I skipped over the patch of mud at the front door. We all gathered in a circle. Doña Maria began to pray. I understood words, but not everything. She thanked my parents and brothers and me. She thanked  God and described Him in beautiful ways such as ‘King’ or ‘Adorable’. She began to cry. Dad put His hand on her shoulder. I did too.“Gracias hermano, gracias. No puedo comer…no puedo pagar…” she said that she couldn’t eat or pay, but God provided.
Have you ever felt…have you ever KNOWN…that God is there. Right there. So close that you could go out and grasp His hand. So close that you needed to hold His hand.  Each time my heart beat, I felt even closer to God.
She ended her prayer and said good morning to us. “Buenos dias, Buenos dias!” she said. We said goodbye and left. We left knowing that in just a short period of time, God was glorified and praised. 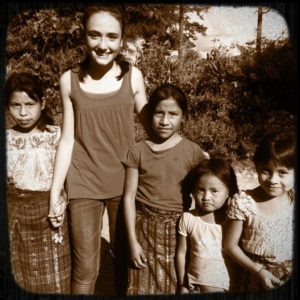 I heard this quote once:  “Missions exist because worship does not.”
A missionary’s purpose, their calling, is to create more worshipers.  Think about that. Think about what that means in YOUR life.  What is God calling you to do right now?  How might your listening to God’s calling bring glory and praise to Him?  Think about how your mission, how your listening may create more worshipers throughout the world.
-Cecilia Sisneros, Missionary in Guatemala
If you would like to support what God is doing through us in Guatemala, go to www.GodCalledUs.com and click on the link “Support this mission”.
Share on