Skip links
Under His Wings
I used to have chickens. Really cute chickens. Chickens that I loved a lot. But when we decided to move, we had to sell them, sadly. When the new owner came with their pickup truck to take our chickens, my brothers and I held our chickens close like they were our own babies.  We told the owners stories about their daring escapes, or how this one or that one’s sister got eaten.  We also shared tips on how to make them happy.
Giving Fabuloso away was hard. I once had two other chicks that I called my own. Tragically my dog was hungry when the chickens arrived at our house.  So they died. Out of the three, Fabuloso was my favorite. She was the fluffiest, the biggest and she was the boldest.
One day the new owners told us a story about Fabuloso, now known as Fabulous.  She would not get up to eat! She sat there, waiting for her unfertilized egg to hatch.  She starved and starved. When the owners traded out a baby chick for the egg, the chick would lay under the wings of Fabulous.  Knowing that her new baby was safe and sound, she finally got up and ate. 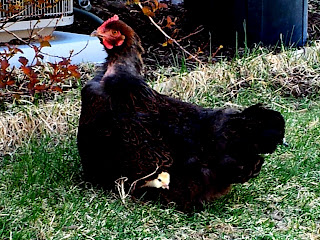 It’s amazing to me that Fabulous wouldn’t leave her egg. She put her own life behind her chick.
Even though God won’t die and can’t put His life behind ours, He loves us so much! Even more than Fabulous loved her baby chick.
I have been seeing God in so many ways. He has done so many miracles and answered so many prayers lately. Only a few days ago, I thought this was because we were doing this for God. I thought the situation was “works”. I thought that because we were going to Guatemala for Him, He paid us back for the good things we were doing. But, when I explained this to my dad, he had a different perspective. He said that God blesses us always! Whether we become fulltime missionaries or not He will always give us what we need.
So why didn’t I notice it before?
I think once we decided to move to Guatemala, I’ve seen God so much more. Whether or not He simply blesses us or He performs a miracle before our eyes, I have realized that He is always there, covering us with His long wings, every moment of the day.
Maybe I have just been looking for Him more often, calling out His name like His own baby chick. Maybe that’s why I have seen God in so many ways.
I heard a quote once, and I’d like to share it. “Looking is different than seeing”. I definitely believe this is true. And looking for God is definitely better than seeing or noticing Him.
Share on