I remember meeting David for the first time. His family had come to visit his grandma. There was no work where they were living so they came to see if David’s dad could find a job. A visit turned into a stay and then David’s family moved into a house nearby.

They moved from one house to another but David’s dad could not find a job. David and his sisters enrolled into school. I think it was a good decision. They needed some stability. They needed a place they could call home.

Eventually David’s dad gave up. He left. I think he felt like his family was better off where they were, without him. I don’t know. It seemed like he felt broken. I know the pressures of providing for your family. But his pressures were at another level. I’m in no way saying what he did was right. Clearly, it was wrong. But for me to sit back and pretend that I had any clue about what his life was really like would be arrogant.

I remember David’s grandma telling me he had moved out. He had left his family. It was a lot of pressure for her. She loved her daughter and grandchildren but at the end of the day, there were now 5 more mouths to feed from already bare cupboards.

David struggles in school. He failed the 3rd grade. He struggles emotionally. If someone were to ask me what it looks like when a father leaves their family in the villages of Guatemala I would point to David. He wears his pain in his big  brown eyes. He tries to hide his sadness underneath his contagious smile. And it all spills out at school.

Here’s the thing. G-d is bigger than poverty.

Every day I ask the boys for a volunteer to pray. David always raises his hand. Always.

I’m not sure David realizes quite yet but his Father never left. In David’s darkest days, his Father was right there with him. When he cried himself to sleep, he was being held and comforted by our Lord.

While my family was in the States, David failed 6 of 10 classes his first quarter of school. Last week I met with each boy at the academy to go over their grades. Most boys had improved. David improved! He failed just 4 classes. Two less than the first quarter.

David was nervous when it was his turn to talk about grades.

He smiled a nervous smile, “But I failed 4 classes.”

“You are smart David. You are one of the most kind kids I know. With G-d, you can do ANYTHING. You can be a mechanic. You can be a driver. You can be a pastor!” I don’t know if David ever thought about his future but in that moment his eyes LIT UP as if to say, “REALLY?”

And then we made a plan. David normally comes to the boys academy on Tuesdays. I told him I want to see him on Mondays and Wednesdays too. While I’m teaching the other boys English and bible, David works with Adalis. She tutors him and helps him with his homework.

Yesterday, David and I ate lunch outside together. I know I say this a lot. But it was one of the best moments I’ve had in Guatemala.

G-d is bigger than poverty.  I had lunch today with living proof. 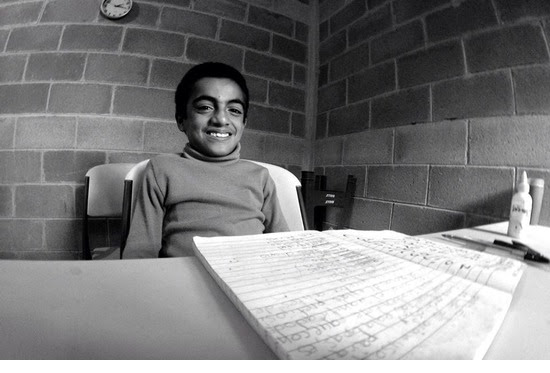