If you haven’t read part one, click HERE to read last weeks blog.

Jose Mario started coming to the academy midway through last year and is now in the 6th grade. I meet with about 125 students every quarter to go over grades. Jose Mario was one of the last boys I met with last quarter.

He quietly answered without looking at me, “Mal” (bad).

He was failing four classes, which is not like him. I asked, “Why bad?”

His hands were blistered and covered in sores. The infection had spread to his eyes and face. He had sores on his arms, neck and ears. He was in bad shape.  We sat in silence for quite a while. I couldn’t find the words. I could FEEL his fear.

I told him that I’d recently found a new doctor who I had a lot of confidence in. “If she thinks it would be good for you to live with us for a while, do you think you could do that?” In my heart of hearts I felt his infection was coming from something he was touching so I wanted to make sure he was willing to leave his home until we figured it out.

He looked up and nodded, “yes”.

“Ask your mom to come visit me tomorrow and let’s get you to our doctor ok?”

We didn’t talk about grades. We just sat together and prayed. “Our Father in Heaven, hallowed be Your Holy name. Your Kingdom come. YOUR will be done Lord…today…right here…in this place…in this moment…heal this boy Father. Forgive us our sins as we forgive those who have sinned against us. Lead us away from the temptations of the enemy. Deliver us Father. Deliver us Father. Deliver Him Father. Amen.”

The next day was Saturday and his mom came by the academy. We talked for almost an hour as she caught me up on the last three years. She’d married and had 3 new little ones that kept her very busy. They’d moved from a block home they were renting, to a one room (box) made of corrugated sheet metal with dirt floors. Her husband sells ice cream from the back of a truck and earns about a dollar an hour, working 10 hours a day. They’ve not taken Jose Mario to a doctor in 3 years because they can’t afford it. They went to the National Hospital once but couldn’t afford the medications prescribed.

With tears in her eyes, “Thank you. The truth is, I thank God He put us in your path. We have prayed that God would touch your heart to notice us again.”

I leaned forward and waited for her eyes to find mine.  I assured her, “We’ve never stopped praying for your son.”

We drove an hour and a half the following Monday to see the new doctor.  We went through Jose Mario’s entire history with Dr. Ojeda. We told her about all the other doctors and how they thought it was something he was touching.  We told her about how the antibiotics helped but that the sores kept returning. We told her about his stay at the National Hospital and how he healed without medicine and without seeing a doctor. We told her everything.

There were two doctors in the office that day. After they both looked at him they agreed, “He has a severe sun allergy.”

WHAT? Seriously. My brain couldn’t process it. It didn’t make sense.

“Why did he feel better after his stay at the National Hospital?”

“He didn’t go outside. He wasn’t exposed to the sun.”

“Why did the sores return after the antibiotics?”

“The sores are itchy, so when he scratches them, they get infected. The antibiotics were treating the infection. When he goes out into the sun again, he gets new sores. BUT, we’re pretty sure he has other allergies as well. Maybe it’s the soap they’re using. The heat from their home will make him itch if he’s been out in the sun. There are multiple things going on here but the sun allergy is the most serious problem.”

The doctors prescribed antibiotics, steroids and steroid cream, moisturizers, sunglasses and gloves with UV protection and they urged us to see an eye doctor so we could “try to save his vision.” AS SOON AS POSSIBLE.

I asked if there was an eye doctor in the building? Dr. Ojeda said there was.  She called and explained Jose Mario’s desperate situation. The secretary said their schedule was full but that we could come back on Wednesday afternoon. The doctor explained that we lived an hour and a half away and again asked if there was ANY WAY to see us today.

“If they want to wait, the office reopens at 2pm. I can’t promise anything.”

So we grabbed lunch and then started waiting at 1:45. At 2pm the doctor arrived and we were still the only ones in the waiting room. At 2:15 we were ushered to the doctors office.

You could see by the way she looked at him, she was worried, which made me worried. She spoke so kindly to Jose Mario. “Ven a sentarte aqui mi corazon.”   (“Come sit here sweetheart”) 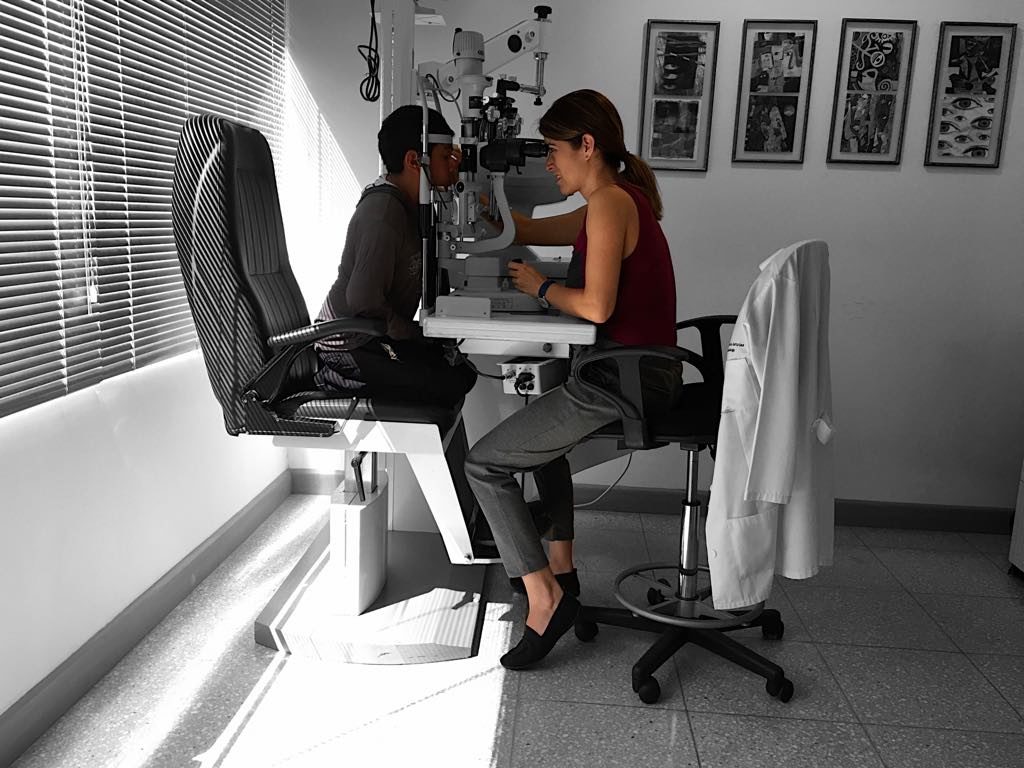 His eyes were infected and were oozing a yellow liquid. She wrote prescriptions for multiple medications and told us to visit her at the national hospital in 5 days. She wanted to keep a close eye on him.

That was 2 weeks ago.

(To be continued next week)